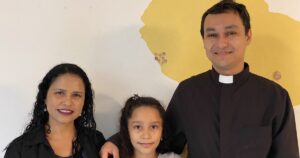 Rev. Rafael Milagres’ path into the Holy Ministry has some parallels with Martin Luther’s. Rafael grew up a practicing Roman Catholic in Belo Horizonte, Brazil. However, he had a breakthrough as an adolescent Franciscan schoolboy when doctrinal inconsistencies led him to dig into the Scriptures and seek a church with more biblical underpinnings. As a result, the Evangelical Lutheran Church of Brazil (IELB) became his church home. Milagres, who had considered the priesthood on and off throughout childhood, studied theology at the university level. Then, with some encouragement from his IELB pastor, he began his formal pastoral formation at the Lutheran University of Brazil in 2015.