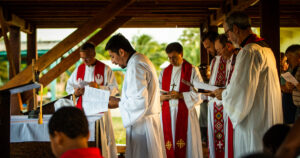 Pastor Benjamin and Karina Flores, with their son Lucas, serve the Lord in Belize, Central America. Benjamin was born and grew up in Cochabamba, Bolivia. Benjamin was Catholic but attended the Lutheran High School in Cochabamba. After high school, he studied chemical engineering for three years but called the pastoral ministry. Encouraged by his Lutheran pastor, Benjamin began theological studies at Concordia Seminary in Buenos Aires, Argentina, in 2014. He transferred to and completed his studies in 2019 at Concordia the Reformer Seminary in the Dominican Republic.