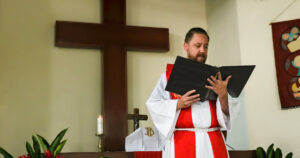 Rev. Raphael Voigt did not always want to be a pastor. He grew up Lutheran in Santa Catarina, Brazil, and worked as a computer programmer and systems analyst. Then, Voigt began volunteering with his church’s youth. He was a natural at youth work, and by 2014, he held a regional leadership role. A pastor friend encouraged Voigt, so he commenced seminary studies in 2015. His coursework exposed him to hospital visits, drug rehab center chaplaincy, and children’s recorder lessons in the shantytowns known as favelas. Voigt remained involved in favela ministry during his vicarage in Rio de Janeiro, Brazil.